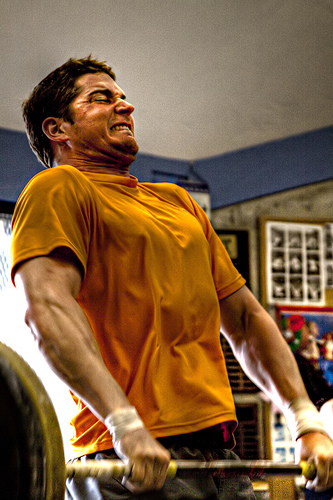 With just a week before the 2010 CrossFit Games start in Los Angeles, CrossFit HQ and USA Weightlifting have announced a joint competition which will be held in October in Colorado Springs, CO.  Scoring for the event will be a combination of a max kilos lifted in the traditional Olympic lifts (snatch and clean & jerk) combined with the number of rounds completed from an event being called “The Triplet”.  The Triplet will be a 10 minute period during which athletes will complete as many rounds as possible (AMRAP) of the following exercises 6 squat cleans at 121 pounds for men and 66 pounds for women,  12 pull-ups and 24 double unders.

Of particular interest is that athletes will compete within the traditional Olympic weight classes, a first for CrossFit competitions which traditionally have seemed to favor athletes weighing in between 160 and 200 pounds.  Two CrossFit celebrities who weigh in on the lighter side immediately took note.  Mixed amongst the comments on Crossfit site was the following note from Chris Spealler (weighing 140 lbs) :

Did I hear weight classes, I must be dreaming. I’m so wanting to be in on this

You did hear weight classes. We’re not dreaming. I am so going to be in on this.

Additional details will undoubtedly come out in the coming weeks as CrossFit HQ shifts their focus from the 2010 CrossFit Games to this new event.