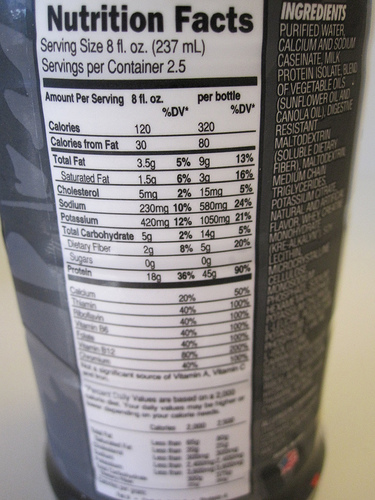 Consumer Reports has released a study showing some of the most popular protein drinks and shakes have high levels of lead, arsenic, mercury, and cadmium. In the case of the popular Muscle Milk by CytoSport, lead levels were 35% higher than those recommended by the U.S. Pharmacopeia (the standards setting body for prescription and over–the–counter medicines). EAS’s Myoplex also appeared in Consumer Reports’ crosshairs with arsenic levels coming in 12% higher than the suggested safe levels. According to the Consumer Reports website:

“All drinks in our tests had at least one sample containing one or more of the following contaminants: arsenic, cadmium, lead, and mercury. Those metals can have toxic effects on several organs in the body.”

Both CytoSport and the EAS websites contain press releases which contend their drinks are entirely safe when consumed in the recommended amounts.  The manufacturers also point out their products are thoroughly tested by independent labs and have repeatedly been found to be safe at the suggested serving size.  They also mention all of the tested elements are naturally occurring in the environment in a variety of food sources.

In the end, Consumer Reports points out that a number of natural sources of protein are substantially cheaper than the average protein drink without the risk of toxic materials.

“Meeting your daily protein requirements through a balanced diet rather than supplements is best for both your health and your wallet.”

As one of the images on the Consumer Reports website points out: three glasses of milk, which provides 23 grams of protein, cost about 60% less than a comparable amount of protein powder.