The New York Times website had a lengthy article on businesses which have incorporated CrossFit into their corporate culture. The level of involvement ranged from a small startup where co-workers collectively headed to CrossFit NYC for an afternoon break to Hitachi Global Storage which has it’s own on-site affiliate run by CrossFit Celebrity Jason Khalipa.

One of the primary companies discussed is Colorado based Datalogix which is working with Games competitor Patrick Burke. From the article:

There are other, less quantifiable benefits. Karin Eisenmenger, 46, Datalogix’s director of order management and the woman running up the stairs past her panting colleague, says the classes unite people from different departments who might otherwise never meet. “If you can sweat and groan and moan with your co-workers,” she said, “you’ll have no problem working with them in a meeting.”

Ben Nelson, 31, an information technology analyst who says he lost 60 pounds after he started CrossFit in 2010, said a lunch hour spent doing squat thrusts and swinging kettlebells enabled him to work longer and with greater focus. “I used to work for the Dish Network,” he said, “and the workouts there were running up and down the stairs on the way to company meetings.” 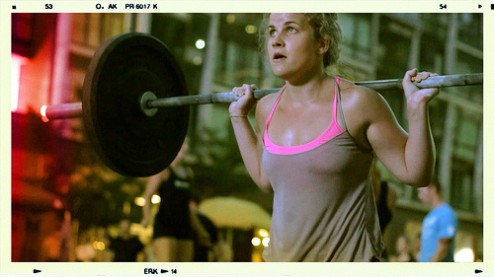